In response to the recent world-wide pandemic of the coronavirus, various Internet memes have been spreading through social media platforms misquoting passages from the Mosaic (old) covenant.

These passages are quoted as promises from God that if believers would humble themselves, pray to God and repent from their sins then God would hear from heaven, remove sickness and heal their land. See below for an example of one of the Internet memes that quotes 2 Chronicles 7:11-14: 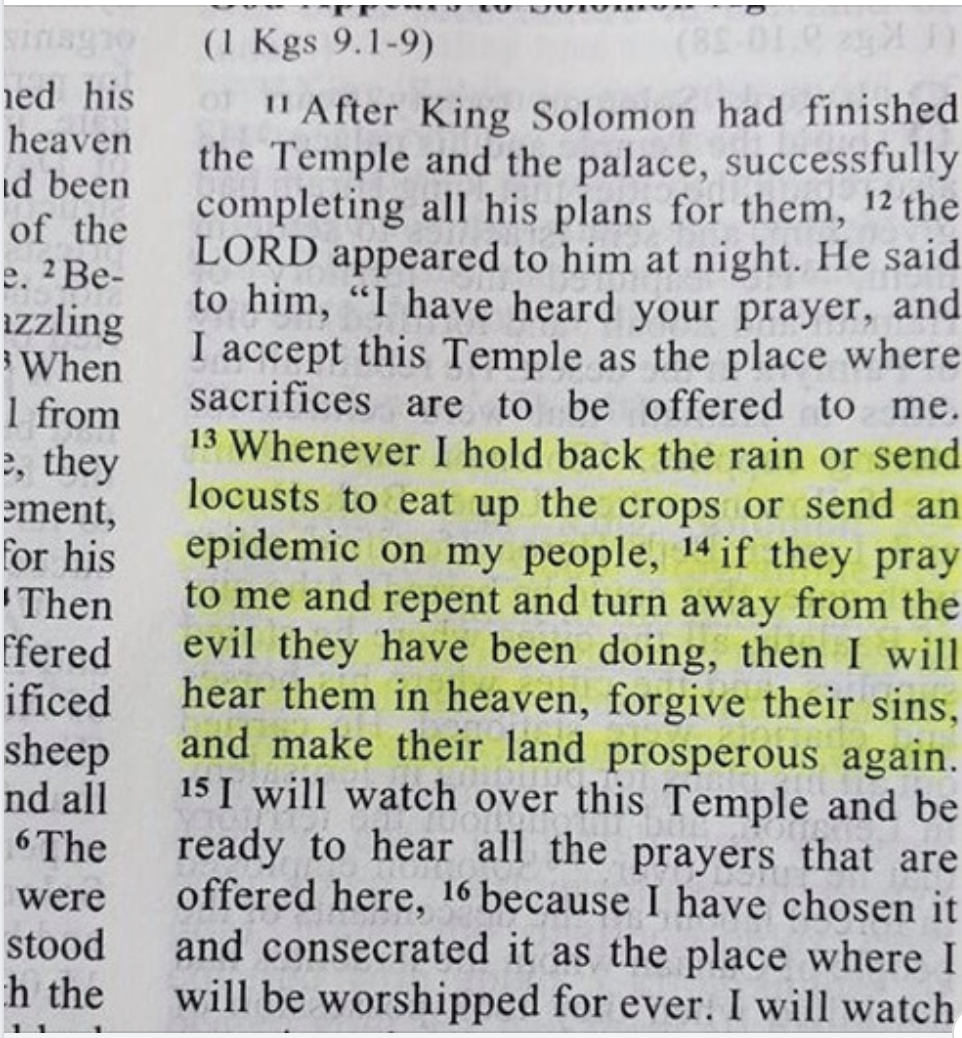 This conditional aspect of the Mosaic (old) covenant was intended by the LORD to serve as the means (a strict disciplinarian/pedagogue, Gal. 3:24) by which God led Israel to Christ. By obedience to the terms of the old covenant physical blessings or curses were received (see Deut. 28).

Thus, the Mosaic (old) covenant was based on law and required the national obedience of Israel in order to receive blessings. The condition was, “All these blessings will come upon you and overtake you if you obey the LORD your God” (Deut. 28:2). However, if national Israel failed to obey the terms of the old covenant, then they would receive curses. The warning was, "But it shall come about, if you do not obey the LORD your God, to observe to do all His commandments and His statutes with which I charge you today, that all these curses will come upon you and overtake you" (Deut. 28:15) These curses included drought, disease, and plagues of locust (Deut. 28:21-22, 38).

Thus, this is the context in which we are to understand the LORD's directives to Solomon in 2 Chronicles 7:11-14. The LORD is reminding King Solomon of the terms of the Mosaic covenant that He had made with national Israel.

Israel arrogantly thought they could keep the terms of the old covenant that the LORD had made with the nation at Sinai- “All the words which the LORD has spoken we will do" (Exod. 24:3)! Yet, if you read the unfolding story of Israel, you discover that Israel fails quite spectacularly to obey the terms of the old covenant. King Solomon, as did all subequent kings after him, failed miserably (1 Kings 11).

Consequently, after Solomon's downfall, the nation of Israel divides into two kingdoms- Israel in the North and Judah in the South. You can read 1 and 2 Kings and 2 Chronicles to see the downward spiral of both the Northern and Southern kingdoms. The LORD sent prophet after prophet to remind national Israel of the conditions of the Mosaic (old) covenant (see Lev. 26; Deut. 28). Tragically, Israel did not listen to the warnings of the LORD's prophets. Consequently, the curse of exile (Deut. 28:64-66), fell on the Northern kingdom of Israel in 722 BC. Ten tribes of Israel were taken into Assyrian captivity, never to return. Then, in 586 BC, the Southern kingdom of Judah was taken into Babylonian captivity.

The prevalent misquoting of the Mosaic covenant is a direct result of a lack of a proper understanding of the covenant that God made with Israel at Sinai (i.e., the Mosaic covenant). Thus, people at best are given false comfort and false hope or at worst they are buried under a load of crushing guilt because they have not humbled themselves, prayed enough, or repented of their sins enough. The burden of living under a principle of law- "Do this and live"- proves to be suffocating.

All of these negative consequences, however, could be avoided, if one had only possessed a proper understanding of the Mosaic (old) covenant. In short, the Mosaic covenant was a subservient, temporary, typological, national, covenant of law that administrated the covenant of grace (i.e., drove Israel to Christ). Michael Brown and Zach Keele, in their book, Sacred Bond: Covenant Theology Explored, write,

In the written record of the lives of real people and the history of a nation, God reveals in the Mosaic covenant his inapproachable holiness and the impossibility for sinful humanity to be saved by works. In short, through the Mosaic covenant, God shows our utter need of Christ (103-104).

As believers who live under the new covenant, we no longer live under the old covenant. With the coming of Christ, the Mosaic (old) covenant has become obsolete (Heb. 8:13). We are no longer under Moses (Gal. 3:25). Futhermore, the Mosaic (old) covenant was only made with national at Israel at Sinai. No other nation on earth, including America, is in covenant with God as a nation. We had no representative on Mount Sinai (Sacred Bond, 148). The authors of Sacred Bond write,

The only nation in covenant with God is God’s new global nation, that is, his new covenant church. “But you are a chosen race,” says the apostle Peter, “a royal priesthood, a holy nation, a people for his own possession, that you may proclaim the excellencies of him who called you out of darkness into his marvelous light” (1 Pet 2:9). In the new covenant, the church is no longer limited to the physical descendants of Abraham but is made up of all the nations of the earth, people of every race, color, and language (Ibid).

The new covenant provides the believing sinner with something the old covenant was incapable of giving: righteousness and the forgiveness of sins; as Paul says, “The righteousness of God has been manifested apart from the law” (Rom. 3:21; cf. Matt. 26:27–28; 2 Cor. 3; Gal. 3–4; Heb. 8–10). The old covenant was based on law and required the national obedience of Israel in order to receive blessings. Its condition was, “Do this and you will be blessed” (Deut. 28:2). The new covenant, on the other hand, is based on God’s promise to save sinners. Its condition is, “Believe in the Lord Jesus Christ, and you will be saved” (Acts 16:31; cf. Rom. 10:6–13; Gal. 2:16).

In times of crisis, such as a world-wide pandemic, God's people need to be reassured and comforted and given hope in the midst of disease and death. But, the way to do this is not by misquoting Moses. Our Triune God does not relate to believers on the basis of Moses but Christ! The way to reassure, comfort and instill hope in believers in a crisis is to direct them to the hope of the gospel.

The Apostle Peter says that the gospel promises a living hope through the resurrection of Jesus Christ from the dead. In 1 Peter 1:3-5, Peter writes,

3 Blessed be the God and Father of our Lord Jesus Christ, who according to His great mercy has caused us to be born again to a living hope through the resurrection of Jesus Christ from the dead, 4 to obtain an inheritance which is imperishable and undefiled and will not fade away, reserved in heaven for you, 5 who are protected by the power of God through faith for a salvation ready to be revealed in the last time.

Believers greatly rejoice in the assurance, comfort and hope of a new heaven and new earth that is glorified and free from all disease, sin and death (Rev. 21:1-4). And, believers greatly rejoice that the promise of the covenant of grace, which has been echoed throughout all of redemptive history, is finally consummated, "Behold, the tabernacle of God is among men, and He will dwell among them, and they shall be His people, and God Himself will be among them, (Rev. 21:2-3; cf. Gen. 17:7; Ex. 6:7; Lev. 26:11-12; Jer. 31:33; 2 Cor. 6:16).

We look for the resurrection of the dead, and the life of the world to come. Amen.