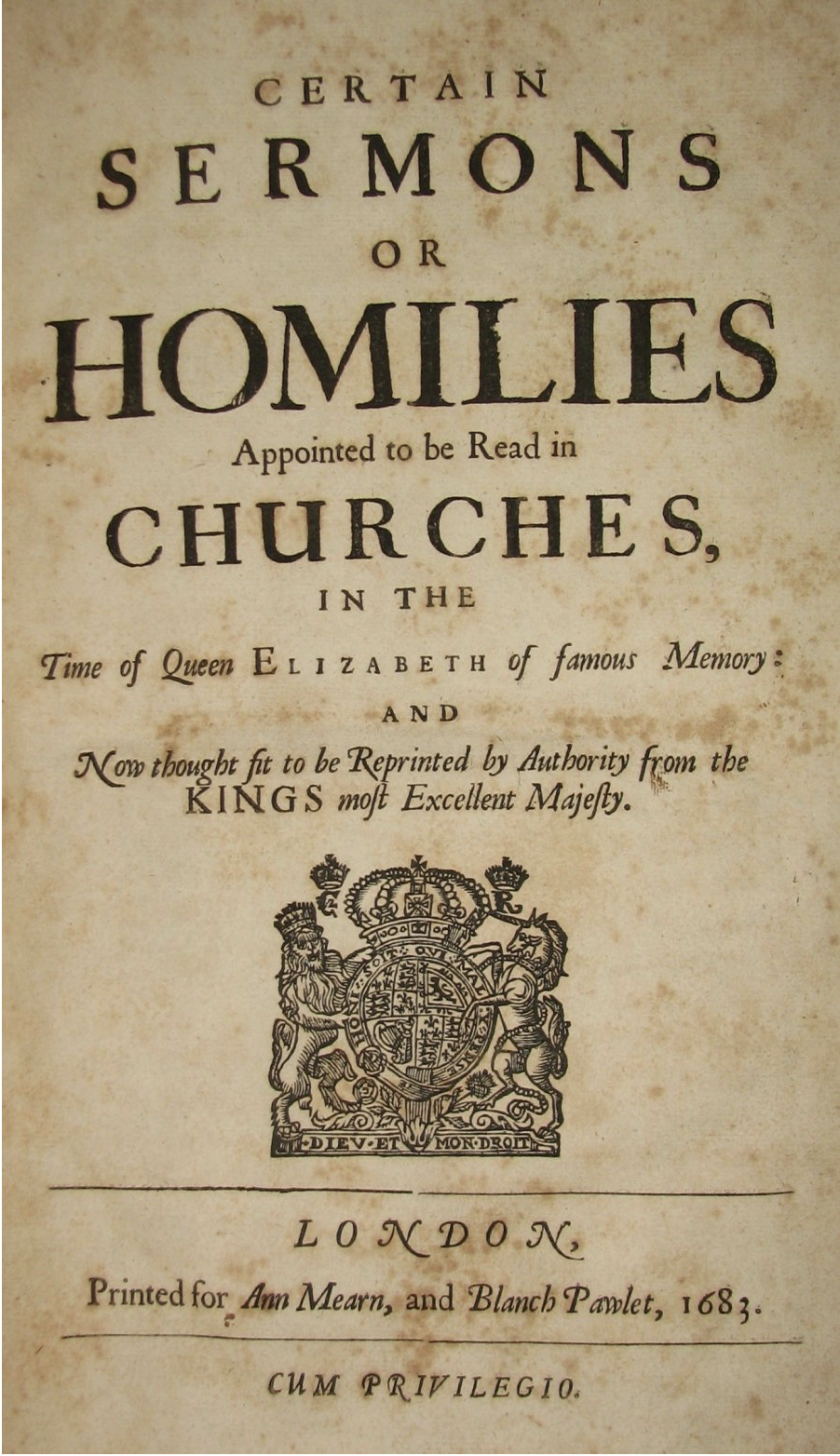 The Romish doctrine concerning Purgatory, Pardons, worshipping and adoration as well of Images as of Reliques, and also Invocation of Saints, is a fond thing vainly invented, and grounded upon no warranty of Scripture; but rather repugnant to the word of God.

The purpose of the article is to reject a series of beliefs which were central to the piety of the Medieval English Church, but which the English Reformers believed were contrary to biblical teaching. . .

The word ‘fond’ is used here in its old sense of ‘credulous’ or ‘foolish’ and ‘vainly’ means ‘pointlessly or ‘without purpose’. The sense of the final clause of the article would thus be brought out by its being paraphrased as ‘(doctrines which) have no grounding in Scripture, but are rather repugnant to Scripture and which are therefore foolish and invented to no purpose.’ . . .

This homily makes four key points against the use of images, which, it says, are idols under another name.

What is rejected here [in Article 22-J.F.] is the use in Christian worship of any images of God, Christ or the saints, whether two or three dimensional, and any adoration of the relics of the saints. The reason for the rejection of the use of images and relics is set out in detail in the sixty nine pages of the homily ‘Against Peril of Idolatry.’ This homily makes four key points against the use of images, which, it says, are idols under another name.

Firstly, it argues that images are forbidden by God in the Old Testament:

For when God had chosen to himself a peculiar and special people from amongst all other nations that knew not God, but worshipped idols and false gods, he gave unto them certain ordinances and laws to be kept and observed of his said people. But concerning none other matter did he give either more or more earnest and express laws to his said people, than those that concerned the true worshipping of him, and the avoiding and fleeing of idols and images, and idolatry for that, both the said idolatry is most repugnant to the right worshipping of him and his true glory, above all other vices, and that he knew the proneness and inclination of man's corrupt kind and nature, to that most odious and abominable vice.

Secondly, it declares that the use of images is also rejected by the New Testament:

. . . the scriptures of the New Testament do in sundry places make mention with rejoicing, as for a most excellent benefit and gift of God, that they which received the faith of Christ, were turned from their dumb and dead images, unto the true and living God, who is to be blessed for ever (Romans 1:25), namely in these places, the fourteenth and seventeenth of the Acts of the Apostles (Acts 14:15, 17:30) the eleventh to the Romans (Romans 11:30), the first Epistle to the Corinthians, the twelfth chapter (1 Corinthians 12:2-3), to the Galatians, the fourth (Galatians 4:8-9), and the first to the Thessalonians, the first chapter (1 Thessalonians 8-9).

And in likewise the said idols or images, and worshipping of them, are, in the scriptures of the New Testament, by the Spirit of God much abhorred and detested, and earnestly forbidden: as appeareth both in the forenamed places, and also many other besides, as in the seventh and fifteenth of the Acts of the Apostles (Acts 7:41-42, 15:20,29), the first to the Romans, where is set forth the horrible plague of idolaters, given over by God into a reprobate sense to work all wickedness and abominations not to be spoken, as usually spiritual and carnal fornication go together (Romans 1:23-32). In the first Epistle to the Corinthians, the fifth chapter, we are forbidden once to keep company, or to eat and drink with such as be called brethren or Christians that do worship images (1 Corinthians 5:11). In the fifth to the Galatians, the worshipping of images is numbered amongst the works of the flesh (Galatians 5:20), and in the first to the Corinthians it is called the service of devils, and that such as use it, shall be destroyed (1 Corinthians 10:20-22).

And in the sixth chapter of the said Epistle, and the fifth to the Galatians, is denounced, that such image worshippers shall never come into the inheritance of the kingdom of heaven (1 Corinthians 6:9-10,Galatians 5:20-21) And in sundry other places is threatened, that the wrath of God shall come upon all such. And therefore St. John in his Epistle exhorteth us as his dear children to beware of images (1 John 5:21).

Thirdly, it contends that the Early Church followed the position taken in the Old and New Testaments, stating that that the testimony of ‘the old learned and godly doctors of the Church’ and of ‘ancient histories ecclesiastical,’ shows that in agreement with biblical teaching:

. . . images and image worshipping were in the primitive Church (which was most pure and uncorrupt) abhorred and detested, as abominable and contrary to true Christian religion. And that when images began to creep into the Church, they were not only spoken and written against by godly and learned bishops, doctors, and clerks but also condemned by whole councils of bishops and learned men assembled together, yea, the said images by many Christian emperors and bishops were defaced, broken, and destroyed, and that above seven hundred and eight hundred years ago, and that therefore it is not of late days (as some would bear you in hand) that images and image worshipping have been spoken and written against.

Fourthly, it notes that experience shows that the worship of images in the Church leads people to exactly the sort of pagan idolatry condemned in Scripture.

Having outlined the similarities between the descriptions of the worship of pagan idols in Scripture and the Fathers and the practices of those who worship images within the Church, the homily states:

Wherefore, when we see men and women on heaps to go on pilgrimage to images, kneel before them, hold up their hands before them, set up candles, burn incense before them, offer up gold and silver unto them, hang up ships, crouches, chains, men and women of wax before them, attributing health and safeguard, the gifts of God, to them, or the saints whom they represent, as they rather would have it: who I say, who can doubt, but that our image maintainers, agreeing in all idolatrous opinions, outward rites, and ceremonies with the Gentile idolaters, agree also with them in committing most abominable idolatry?